The ABCs of Lacrosse Terminology 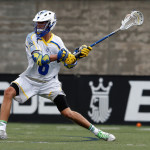 Unless you’ve been involved with lacrosse for some time, you will probably hear unfamiliar terms coming from coaches or other players. For example, do you have any idea what is meant by “Watch this guy. He’s All Right.” Nope, it doesn’t mean he needs a high five. In lacrosse-speak, the term refers to a player who strongly favors using his dominant right hand. Similarly, “All Left” means the player predominantly relies on his left hand. I might never have known without the handy reference guide Laxicon: The Official Lacrosse Dictionary.

Here are a few more:

Fogo: \ n. \ acronym for “Face-Off, Get Off”. A player who is only on the field during the face off. Most FOGO’s are the centermen or face-off men during the draw but they can also be wing men, often with a long stick. FOGOs evolved into the game of lacrosse around the turn of the century due to specialization in lacrosse.

Rusty Gate (Rusty gate check) \ n. \ slang for check in which the defender holds his crosse* with his bottom hand and in one motion swings his crosse behind his back and around his defender to dislodge the ball from his opponent’s crosse. 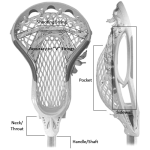 *And, for the uninitiated,  the origin of the term Crosse: \ n. \ proper name for a stick. From the French word “Crossier” or curved staff. Refers to the head and shaft together or more appropriately to the one piece wooden stick used before 1970 and still used by some box players and Native Americans, who, of course, invented them.

These and over 300 more official and unofficial (slang) words from the world of lacrosse are helpfully provided by http://www.e-lacrosse.com/laxicon.html . Keep it bookmarked to avoid awkward conversations.