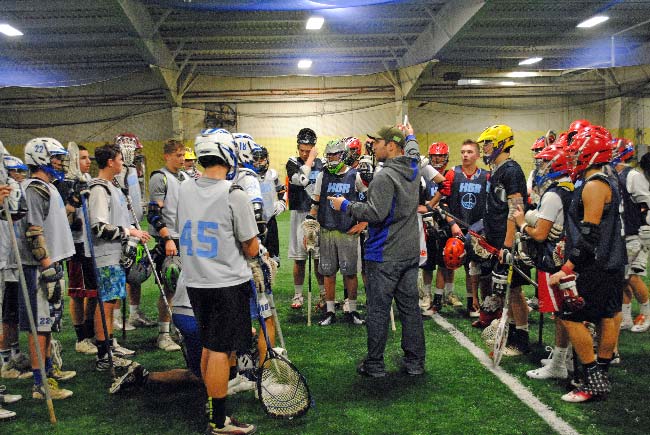 Coach Peter Smyth explaining the house rules to Burlington and Danvers before their first game of the winter league.

With 800+ lacrosse players, HGR’s Lacrosse League has become one of the top leagues in New England!

Our Roving Reporter sits down with Coach Brazill to discuss this exciting landmark.

How did HGR achieve these numbers and why is this great news for our lacrosse players? What does this mean as an accomplishment?

Back when we first started out, giving 3 private lessons an hour filled us to capacity. Now on any given Saturday or Sunday, we fill up two facilities with high quality lacrosse. We’ve got the major part of the high school lacrosse community in the North Shore of Massachusetts coming through our doors to play off-season lacrosse. That blows my mind and is very cool!

What do you attribute that to?

There are a bunch of different factors. Whereas other facilities typically were soccer first, and supplemented the rest of their time with lacrosse, we decided to offer a top quality “lacrosse first” facility and created an atmosphere that is unique to our sport. There are old wooden sticks hanging over every door, framed and signed Boston Cannon’s jerseys, helmets hanging from the ceiling and huge 20 x 10ft lacrosse banners lining our field for companies like Lacrosse Unlimited who pay to be a part of that feel. When you walk into other places, you don’t feel lacrosse. You walk in here and you feel lacrosse. That’s cool.

Pete (Coach Peter Smyth) and I just kept working to give kids what they wanted. We put them and the service we provided them above all else. Another big factor was that the Raptors were doing the exact same thing on their end for years. So when we combined, the sum turned out to be fantastically greater than the parts. When the two of us combined, we were two big leagues with two big Elite programs who then became huge.

Then people started coming from all over because we never lost our attention to detail or our customer first mentality even though we’d grown so large. The Raptors founders had sons who were three of the best players in Massachusetts when they started their program and they grew from there. So their influence was big that way. They were very similar to us in that they always had the best interest of their players in mind, rather than just a big dollar sign at the end of the day. That’s not the case with everybody in this industry. It was great that our values and approaches to lacrosse lined up so well, so that the Raptors players and parents felt at home when we merged.

Why is the size of the league an advantage?

Size is good because the competition within our league is really strong. This winter, I’ve gotten calls from three or four programs that are in other leagues in the area telling us their league competition stinks and they want to get into HGR’s league. And I’ve had to tell them that they have to wait until next year because we’re sold out, but we’d love to have them moving forward.”

With 750 kids, there’s a tremendous amount of talent floating around our league. So if you are a really good lacrosse player from a really good lacrosse town, you’re going to find really good competition because you’re not alone. Billerica, Chelmsford, Peabody, Andover, North Andover and Masco are all strong programs and there is no clear dominant favorite. That’s good for great play, they will fight all season to make playoffs and eventually find a league winner.

What’s also nice about having so many teams in a league is that it gave us an opportunity to create a “B”bracket. There is still quality lacrosse being played in the B bracket (and some weekends they seem to play better games than the A bracket). But the real advantage of a B bracket is that you keep the competition relative so that quality Div II or Div III programs or dominant Div I JV teams don’t have to go up against the some of the best Div I varsity programs in the state week in and week out.

Another advantage with the size of our league is that we get the best refs around. The other day, I was at the Tewksbury facility and the crew that was over there, in my opinion, were the best four refs in Massachusetts. They’re guys that work college games regularly. I’m pumped when I see them show up to work a Merrimack game because you know they are going to call a quality game. Most leagues have one official who may or may not be a patched official, which really doesn’t hold a candle to the caliber that we have. We have two patched officials at every game. At the Tewksbury facility, we have an EMT on staff for any injuries that might occur.

You have to be really administratively strong in order to run a league of this size. The High School Boys Division alone has 32 teams, with four 8-team brackets at two different facilities. So you’ve got to be really good at the administrative side of things to make sure everything runs smoothly, and we’re on top of all that.

Another big problem with leagues is that sometimes teams don’t show up for their game with enough kids. Since we’ve got such a big league with such a high demand, we say that if you don’t show up–if you forfeit a game–then you’re not eligible for playoffs. And if you forfeit 2 games, you’re not invited back next year, because there are plenty of people who want your spot. So if you drive 40 minutes to an HGR league game, you know you’re going to have an opponent.

We also don’t want one person/position being able to affect whether or not a game happens, so we pay goalies to sit around. Sometimes they’re keeping score and sometimes they’re making sure the place is clean, but if a team’s goalie doesn’t show up or gets injured, we’ve got a goalie that can go in. This way, people are guaranteed to get a game in.

These are just a few of the important details that go into running a large league that many of the smaller leagues don’t know about, don’t care about, or can’t afford to do. We make sure we’ve got all that covered.

But maybe the most exciting part of our league, I think, is our All Star Game at the end of the season. In the winter season at the end of the year, we have an All Star Game for Freshman, Sophomore, and Junior boys and one for the girls. They play in this Showcase where we get college coaches from all over New England to come watch these kids play and to potentially recruit them. Because the talent that’s being drawn from to form these All Star teams is so high, it actually makes it a very worth while event for college coaches to attend. These colleges coaches are really interested in getting a first look at all these talented kids at a time in the year where there are no tournaments going on, and the season hasn’t yet started. It’s a nice way for them to get a sneak peek at the kids who are going to be on the market next summer.

So, yes, it takes vision, timing, persistence, organization, dedication, a little bit of luck–all those qualities that any business needs to grow and succeed. But I guess if I had to boil it down, I’d have to say the real reason that I attribute to the success of our league is that we really, truly love what we do and we really, truly care about these kids and their experience. And I think that shows.