Home/News/HGR’s Coach Daly Inducted into the Stonehill Athletics Hall of Fame!
Previous Next 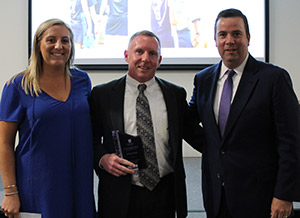 Michael Daly (center) was inducted into the Hall of Fame by women’s lacrosse senior All-American Cara Corvino and O’Keefe.

HGR is very proud to announce that own coach and Girls Program Director Michael Daly has been inducted into the Stonehill College Athletics Hall of Fame! Coach Daly, a former Stonehill student athlete and head coach of the Stonehill Skyhawks women’s lacrosse program, has a long list of honors and accomplishments including:

and many more! Check out our Girls Lacrosse Coaches Page for a summary Coach Daly’s impressive accomplishments.

Here’s what the Stonehill Skyhawks had to say:

Daly served as head coach of the Stonehill women’s lacrosse program for the first nine years of its existence from 1999 through 2007. He built a program from the ground up which would enjoy a run of unprecedented success on the field.

Daly earned Division II National Coach of the Year honors three times over his Stonehill career in 1999, 2003 and 2005, leading the program to 140-27 (.838) overall record in those first nine years of the program’s history, including a near-flawless 81-1 mark in the Northeast-10. Daly was named the NE-10 Coach of the Year six times over his nine seasons in Easton, including a run of five straight from 2002-2006.

Stonehill earned the first five NCAA Tournament bids in program history under Daly – all national semifinal appearances. He led the program to the first two NCAA National Championships in school history in 2003 and 2005, the latter of which Stonehill was a perfect 21-0 for the only undefeated season in school history, while also making a finals appearance in 2002.

Both National Championship teams have been inducted to the Stonehill and Northeast-10 Halls of Fame, along with Katie Lambert ’03, the current women’s lacrosse head coach, who was a three-time NE-10 Player of the Year and IWLCA National Player of the Year. He joins six of his former student-athletes in the Stonehill Hall of Fame, having coached 31 All-Americans, including a pair of National Players of the Year, eight NE-10 Players of the Year and a pair of CoSIDA Academic All-Americans.

Read the full article at StonehillSkyhawks.com»