Interview with our National Champs!

Home/Interviews, News, Q & A’s with the Coach/Interview with our National Champs!
Previous Next

Interview with our National Champs!

Congratulations Coaches of the National Champions!

I was lucky enough to catch a few minutes with three National Lacrosse Champions’ illustrious and extremely proud coaches, whom we are extremely fortunate to have as HGR’s Top Dog (Coach Brazill Brazill) and as talented coaches for the HGR kids (Merrimack Head Coach Coach Morgan and Assistant Coach Smith). It was clear that they’ll be on cloud 9 for a long time, after Merrimack College’s 23-6 victory over the St. Leo Lions.

It was a lot of fun to hear a bit about the team, Merrimack Lacrosse’s past, and the experience of being National Champs. Here’s how the interview went:

Roving Reporter: Thanks for taking the time to talk with me. First of all, I’m wondering where your heads are when you’re really starting to inch ahead. Are you totally focused on the action in front of you, or are you checking to see how much time is left? Are your eyes on the prize or are you tweaking your coaching strategy minute by minute?

Coach Morgan: You’re so caught up in the moment that you don’t really coach in a different way. Once you have a lead like I thought we did, you do start looking at the clock a bit, and as the time starts ticks down, you don’t want to be your worst enemy. You might be thinking “are we going to keep our lead, or are they going to come back,” but you just block those thoughts out of your head and we just keep our same coaching style to a great bunch of guys.

Coach Brazill:  I’m with Mike. Yes, you do keep playing the same way you have all year. I do remember thinking a couple of times, wow, everything we worked so hard to instill in these kids is being showcased at such a high level. I found myself starting to reflect “this is incredible!” Everything we’ve been working on for so long, is working so well and on such a public stage.

Coach Smith: To add to both of them, I would say the same. It’s hard to change your coaching style, in practice and during games. I’d be lying if I said I didn’t really enjoy it, because they were showcased at such a high level of play, on the biggest stage. I had to almost check myself from sitting back and watching, since everything just seemed to be going our way.

RR: I can only imagine. Like you want to start the celebration early, but nope, can’t do it yet, you gotta watch the game and see what happens.

Coach Brazill: Last year we had significant injuries that down the stretch that prevented us from winning that [National Championship] game. This year, we were incredibly lucky to stay healthy. And we’re even more talented probably than last year. That would probably be really the only difference.

Coach Morgan: I agree, and also the experience of our teams; specifically, the seniors and fifth years. Having experienced a season like that [2017] only makes you more hungry coming in. We didn’t really change much of our coaching style, we are who we are, running specific offense and defense that we like and we believe in. I think it’s more that the guys were willing to work at a higher level that we didn’t even know existed until we lost to Limestone [at last year’s National Championship]. We kept what we do pretty consistent and they kind of took their games to another level.

Coach Smith: We did have some tough breaks last year but I think the summer was good for us because we really liked what we had last season. I think that in the last six weeks or so of the 2017 season we really found our stride, and we used the summer to build on that. The kids were really ready to come in and be a better player, and really do whatever it took this past fall. That just carried over into this spring.

Me: Well, that worked!

Coach Smith: So it’s really been a full year of building towards this.

RR: Where there scouts there from the MLL, is that how they work it?

Coach Smith: People from the MLL definitely paid attention to that game; whether they were there or not I don’t know. It wouldn’t shock me if the MLL really took notice of some of the younger players on our team, who are pretty talented and I think they will be good enough to play at that next level.

RR: So, have you nabbed any of the seniors or fifth years for HGR coaching positions?

Coach Brazill: I just got Michael O’Connell on staff. He’s going to be a senior next year. Our [HGR’s] staff page is like the Merrimack Coaching Tree. We take as many of our coaching staff as we can, first and foremost, then players that really understood the game at a higher level, like Tim Towler and Greg Melaugh who coach for us now, and we also have so many great high school coaches.

Me: Great. Now, HGR has so many great young lacrosse players who are now thinking “Oh boy, I’m going to be a National Champion someday.” Do you have one piece of advice above all others to help them get there?

Coach Brazill: I have one. I’d say Pass the ball.

Coach Brazill: Our kids do for sure. They aren’t greedy, there isn’t an ego on the team. I haven’t seen a team of such humble superstars in my entire life.

Coach Morgan: The common theme is that they work hard and they love the sport. I think the guys that do the best when they get here, and the kids who are going to progress when they get here, are the ones that start playing when they are little. To get to that level is you gotta really love the game and you have to put the work in. There’s not a lot of luck that goes into becoming a superstar, winning a national championship. You have to work and sacrifice, try to find the right people to coach you.

Coach Smith: I think Mike and Bryan said it: you have to love the game and keep working on it. We have a lot of good players on our team, but players who get a lot better as the years go on, it’s because they’re willing to listen, and they are willing to try to get better. That’s really a credit to them.

RR: I bet there are a lot of youth lacrosse players who have their eyes on Merrimack now; their applications to Merrimack will be going up. I know I would apply there if I was a lacrosse star.

Coach Brazil:l One thing I think is pretty special about this program is some of the alumni we have, and I think we would be remiss if we didn’t mention that we have had incredible kids who have become adults that helped us win that national championship though they weren’t on the field on Sunday.

Coach Morgan: The one thing that was great to see with our current guys is that we try to have them be aware of the alums who played years ago, who helped us get to this level, hearing so many of our players after the game saying things like “we did this for the guys before us” and “we did this for our families.” They’re very aware of the support they receive and the guys who have played before them. It’s like Bryan says, that’s something very special about this program. Everybody’s done their part over the years in some small way.

RR: I’m really impressed that you are crediting the guys who don’t play anymore; I’m sure it really has an influence on the players today, from the HGR level through to…the National Championship! Holy cow, guys!

On a final note to whoever  acquired Coach Brazill’s National Championship T-shirt from out of his pocket when he was leaping into the stands, you should know that he’s being a very good sport about it! Enjoy! 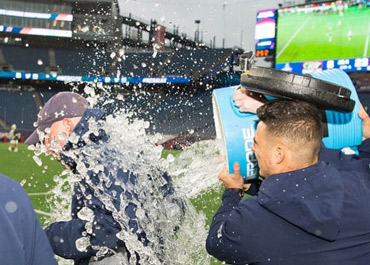 The at home drills are getting better every day. Check out the link in our bio to watch day 19. #hgrlacrosse #whosgettingyoubetter #lacrosse #summeriscoming #imovie

I bet you weren’t both. Which one were you? Comment below.