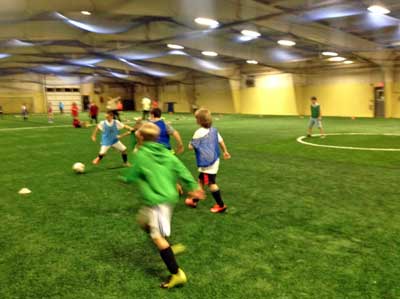 Soccer Foot Skills is now in full swing;  Session 1, having completely sold out in all age groups, runs for 8 weeks.  We had 21 kids on a waiting list, and made a really big effort to make room so we were able to get them all into classes.  Obviously, if we could take a million people, we would; it would be great for us and we really believe in the program, but we want to make sure we keep the quality of our coaching really high too.

So classes are rocking and rolling now–we have 9 full classes a week covering 4-year olds all the way up to 13-year olds. They’re being coached by Roland Dudney who is now in his fourth year with Home Grown Indoor Sports.  The program is in it’s fourth year as well and has been steadily growing since year one.  The program is now in extremely high demand. I think the reason for that is that there’s just an instructor, a kid, and his or her soccer ball.  There’s no game—there’s no winning or losing.

Every kid has their own ball and they’re all there for the same reason, which is to develop their foot skills. So every child can get what they want out of the class because each one can push themselves to their own level. Roland will facilitate whatever level that is, whether a child just wants to have fun and kick the ball around for an hour, or they want to get a lot better whether they’re 4 or 13 or playing travel soccer or last person off the bench—they’re going to get better. To what degree is up to each child in large part, and what they’re willing to take in from Roland.

Having no winner and no loser, and no one going home sad or mad at a Ref leaves a lot of room for high-energy learning.  Roland keeps the atmosphere light and extremely fun while getting in very high-level teaching; that’s his gift. The positive feedback we’ve gotten from parents on the amount of improvement they’ve seen in their son or daughter is a testament to that. People rave about it and North Andover Soccer has been a huge supporter of it. Everybody gets out of the program what they’re looking to get out of the program, which is just to get better at their foot skills.

We’ve also got a new program we’re getting started for Soccer Team Training. Classes have the same structure as Soccer Foot Skills, but rather than teaching the individual how to be a better ball handler and learn fundamentals, Roland teaches team concepts such as team offense and transition. We’ve just filled up the first 2 classes with U-12 and U-10 town teams. Stay tuned to hear more.