Take a look at this rules interpretation video:

Here is a list of the rule changes, followed by the NFHS comments (explanation) on the rule:

1-7-1: The pocket/net must be completely attached to the head and the side walls, leaving no gaps large enough for a ball to pass through.
—Eliminates stringing techniques that could create an unfair advantage.

1-9-1j: Beginning January 1, 2021, a goalkeeper chest protector designed for lacrosse that incorporates the NOCSAE ND200 at the time of manufacture shall be used by all goalkeepers.
–-Adds a piece of safety equipment to protect against commotio cordis in goalkeepers.

4-5-9: A shot is considered a ball propelled toward the goal by an offensive player with the intent of scoring a goal. A shot can only be made when the ball is parallel to or above the goal line extended. Additionally, it can be either thrown from a crosse, kicked, or otherwise physically directed.
–Defines that a shot can only be taken from parallel to or in front of the goal.

4-9-3: If any of the following occur between the end of the period and the shot entering the goal, the goal will be disallowed:

5-3 PENALTY: Penalty for violation of Article 5 is a two- or three- minute, non-releasable foul, at the official’s discretion. An excessively violent violation of this rule may result in an ejection.

5-4-4: A player shall not initiate a body check legally but slides up into or follows through to an opponent’s head or neck.
—5-4-4h Defines the penalty for “targeting.”

5-4-6: A player shall not initiate targeting, which is intentionally taking aim at the head/neck of an opponent for the purpose of making violent contact. This could include a check with the crown of the helmet (spearing) that targets the head or neck of an opponent. PENALTY: Three-minute, non-releasable foul. An excessively violent violation of this rule may result in an ejection.

5-4-7: A player shall not initiate targeting that intentionally takes aim at a player in a defenseless position. PENALTY: Three-minute, non-releasable foul. An excessively violent violation of this rule may result in an ejection.

5-10e: A coach who is on the field and obstructs play.
—Defines penalties for a coach obstructing play.

5-12-1 PENALTY: Three-minute non-releasable penalty for a player, substitute or non-playing team member or a one-minute non-releasable penalty for a coach and ejection for the remainder of the game. The ejected coach shall be removed from the premises (bench and field area). The ejected player, substitute or non-playing team member shall be removed from the premises if there is authorized school personnel present to supervise the ejected student. If no authorized school personnel is available, the student shall be confined to the bench area. The sponsoring authority is responsible for notifying the appropriate school of the ejection.
—Penalizes a coach for an ejectable penalty without penalizing the players.

6-3-2a: A player shall not use the portion of the handle that is between his hands to hold an opponent, when his hands are more than shoulder-width apart.
—Clarifies legal and illegal holds to an opponent.

6-3-3e: Holding is permitted if a player uses the portion of the handle that is between his hands, which are no more than shoulder-width apart, to hold an opponent on the torso with no more than equal pressure and no thrusting motion.

6-5-2b(4): A player shall not exchange his crosse with that of a teammate during live play while the ball is in either crosse.
—Prevents a potentially dangerous play that could result in a shot released toward an unsuspecting and unprepared goalkeeper.

6-11-2: A player in possession of the ball with both hands on his crosse shall not use his hand or arm to push the body of the player applying the check. NOTE: Illegal body checks (5-3), “spearing” (5-4-3) and unnecessary roughness (5-9-3 SITUATION E) shall be strictly enforced as personal fouls.

Please note: US Lacrosse has issued a few corrections/clarifications to the changes for Boys lacrosse rules. You can read the memo HERE.

Your HGR  coaches will be there to make sure you all understand these rule changes, but it will be helpful to familiarize yourselves with their gist on your own. Good luck Summer Elite! 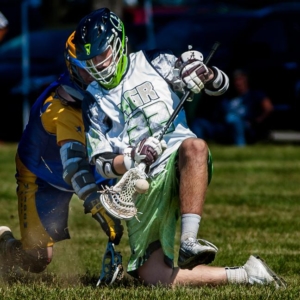